Meet Mat Barnes. He’s a funny, down-to-earth sort of person who loves nothing more than hanging out with his mates, watching a game of footy, and playing a round of golf. He’s also the Coordinator for Moore Park’s Sydney Golf Academy, which means that this easy-going guy who sports a cheeky grin actually oversees the entire set of operations for the Golf Academy.

It’s a daunting task but Mat (a self-proclaimed “golf nerd”) has been enmeshed in the game of golf since an early age.

“The first time I picked up a club, I was probably seven or eight. My grandad and grandma played a little bit so whenever we visited them on holidays up in Wingham, I’d have a game of golf with them. They used to have this old set of golf clubs, and they lived on a big bit of property so we’d get golf balls out of the bag and smack them into the dam.

Eventually, I got to the point where I could play a bit of a game with granddad – like nine holes here and there whenever we visited. And, since dad played a little bit as well, when I was at home, I’d have the occasional game with him.”

It wasn’t until high school, however, that Mat started getting into the swing of it. Although he dabbled in footy, cricket, and soccer, it was golf that really captured his passion.

“I used to wag school just to go and play golf.”

“We had a group of about 10 juniors and we’d play after school and on weekends… usually six days a week. During the holidays, our parents would drop us off in the morning and we’d play like 36 holes of golf and practice afterwards. We’d end up spending eight or nine hours at the golf course before our parents would pick us up after work.”

As a teenager, Mat always wanted to be a pro-golfer (in addition to being a pro footy player, cricketer, sports commentator, and member of the Newcastle Knights). In fact, his love of the game was so strong that it sometimes got in the way of his studies.

“I was a bit of a shocker when I was younger. I just wanted to play sports – I’d ditch all sorts of classes to play golf. I’d think to myself, ‘I want to play golf today’ and just head on out. My teachers definitely knew I was doing it but surprisingly, I never got in trouble. In fact, my Year 12 English teacher, Mrs. Panucci, would buy me golf books to keep me interested in English.”

Going pro is tough though, and after high school, Mat found himself trying out different jobs from working at a chemical manufacturer, to slinging drinks at his local winery. Eventually, he got a position with Fox Sports as a statistician, watching sporting events and recording the statistical data in real-time.

(Side note: If you ever want to see a cool party trick, ask Mat about the NRL Grand Finals – he can rattle off every score since the 1970s.) 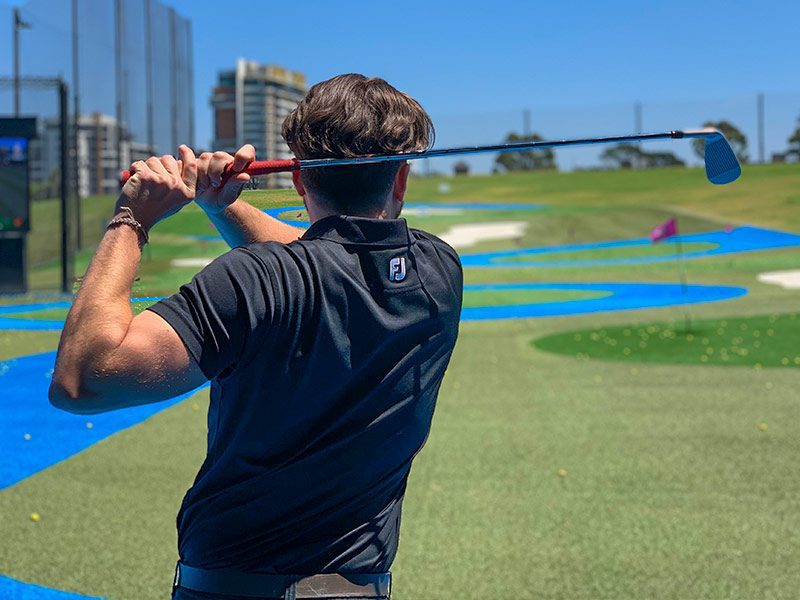 But Mat was a young man with restless feet, and a career as a sports statistician wasn’t the life for him. After a stint in insurance, and a period of unemployment he laughingly refers to as “The Big Rut”, Mat moved down to Melbourne where he worked in merchandising at Rod Laver Arena. Eventually, he followed a spur-of-the-moment decision to move back home to NSW’s South Coast. And, as soon as he did, big things started to happen.

“As I moved home, everything started happening. The day I got home, my younger brother was playing Aussie Rules on his last trial game of the year. In the final 30 seconds, he snapped his leg. I spent the next two or three months working and caring for him. It was a tough time, but it brought us closer together. Then, just as he was starting to get better, I was diagnosed with testicular cancer. I had this scary, brusque Russian doctor who just said, ‘You have a tumour. It’s not good.’”

“I didn’t know what was going on. It wasn’t until my dad and I started researching it that I realised the survival rates were good. So I had the operation, made it through, and a month later, I fell in love for the first time.”

Over the next couple of years, Mat continued to go from strength to strength, eventually getting a job in golf operations at the local course where he had grown up.

“I’d always wanted to work there when I was younger but I think they thought I was a bit of a wild kid (which I was, to be fair). It was great working there, showing the older members that I’d grown up – I actually had members tell me they really enjoyed getting to know me, especially considering I’d been such a little s#!t as a kid.”

However, the winds of change were still blowing, and they ended up whisking Mat up to Sydney.

“One Sunday arvo, I was lying on the couch watching TV and this a voice in my head told me to go on Seek. The first job I saw was Golf Operations at Moore Park Golf Club so I decided to apply. Within two days, I got the job.”

As Mat continued to build his skills and passions in operations, he soon found himself wanting more. The role of Coordinator of the Golf Academy had been sitting empty for a few months, so Mat decided to throw his name into the ring. And the rest, as they say, is history.

“For the first time in my life, I’m really pumped about going into work every day. I’m excited to make something of myself and to grow the game.”

The tearaway kid who grew up skipping school to play golf is now excited to introduce others to the game.

“We’ve got about 140-150 kids on the books right now and it’s really cool seeing them get involved. They start playing when they’re two or three years old and pick up the game so easily because they don’t have any bad habits from any other sports. They’re all little prodigies – I love it.

“It’s so rewarding watching these little kids picking up golf instantly and loving it, and knowing they’ve got a game for life.”

Although Mat is busy these days running the Golf Academy (and living-it-up with his partner, Amanda and dog, Poppy), he still likes to sneak in a game of golf when he can.

“I love everything about golf. I love the social aspect. I love the fact that you’re in nature. But the thing I love most is the creativity. Before you hit a golf shot, you need to picture it in your mind, and then try to recreate that in real life. If you’ve got shots around the green, like chip shots especially, there are so many different ways you can play it.

“No one’s the perfect golfer, and although there are some really, really good golfers out there, you can always improve your game. Every day, every shot, is always different and you’ll never play the same game twice.”

“You’re out in nature, you’re hanging out with your mates, you’re trying to better yourself all the time… it’s just fun. It doesn’t get any better than that.”